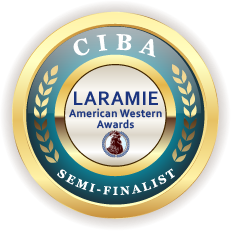 The Gamble: Lost Treasures has been chosen as a Semi-Finalist in the Laramie American Western Award sponsored by Chanticleer International Book Awards. The first place winners will be announced at their conference in April in Bellingham Washington.

The authors, Kelly Abell and Troy Abell are very proud of this honor.

Who fights in a war he doesn’t believe in…twice? Captain Jackson Gamble does, because he’s loyal to his war-decorated father. After leaving the Confederate Army once to care for his ailing father, he reluctantly accepts a second commission to escort the Confederate Cabinet to safety as Richmond falls at the hands of the Union Army.

Secretary of State Judah P. Benjamin has been visited by his daughter, Ninette, at a very inopportune time. She escapes to America to avoid an arranged marriage by her Parisian mother. Willful and stubborn, she finds herself in even more danger than an arranged marriage. She’s kidnapped by Scar, a rogue Union Captain in search of the remaining Confederate gold. While Richmond burns around them, a desperate Benjamin sends Jackson to rescue his beloved daughter with a promise to reunite and find sanctuary at Jackson’s Florida plantation.

Follow the harrowing journeys of Judah, Jackson and Ninette separately traveling the back trails of the deep South. Benjamin is desperate to avoid capture while Jackson and Ninette do all they can to survive hunger, the wilderness, and their growing desire for each other. If that isn’t enough, they must constantly look over their shoulder for the thwarted Union Captain obsessed with ending Jackson’s life and retrieving the woman he believes is his connection to untold wealth.